Hannah Jackson GlobalNews.ca
April 26, 2022  4:00 am
WATCH: Ontario voters concerned most with health care and affordability ahead of election

Health care and pocketbook matters dominate the top five issues that Ontarians say will help them determine how to cast their ballots in the upcoming provincial election, a new Ipsos poll has found.

The survey, conducted exclusively for Global News between April 13 and 14, had each respondent identify their three most important issues ahead of the election.

The survey found that Ontario voters said health care, the handling of the COVID-19 pandemic, lowering taxes, helping with day-to-day expenses, and making housing more affordable were the top five issues that will determine how they vote on election day.

A total of 31 per cent of respondents chose health care as a top-three issue, while 25 per cent said the handling of COVID-19 was one of the top three issues that would determine how they would vote. 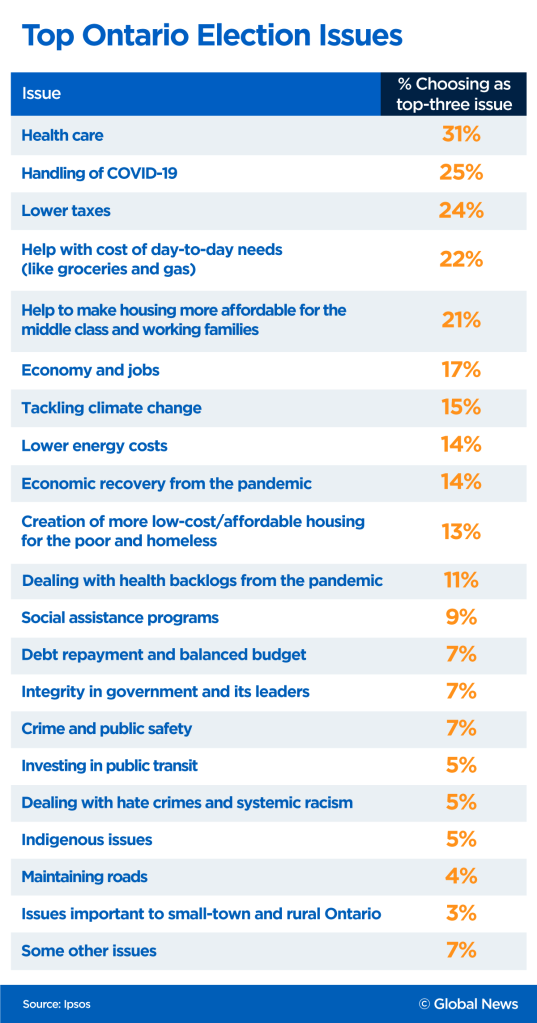 “Overall, health care is leading the pack as the most important issue for people going into this election campaign, followed by the handling of COVID-19,” he said.

“But after that, everything else is really about affordability and the cost of living, particularly, for example, the day-to-day cost of groceries and gas, lowering taxes and interestingly, making housing more affordable for the middle-class families.”

Bricker said people seem to be “balancing out the idea that potentially we could be moving on from COVID-19.”

“They’re still concerned about health care and also, if anything springs back on us, the handling of COVID-19,” he said. “So they’re top-tier issues. But after that, it’s all about the economic recovery, and the economic consequences of the pandemic that we’ve just been through.”

He said Ontarians are looking to see the parties come forward with plans to help them “manage the economic recovery.”

“Talking about big things for the economy (is) not as important as talking to people about helping them with the day-to-day, (the) managing of their finances, making sure that they’re able to actually afford the cost of living in the province of Ontario,” he said.

According to the poll, the other five issues rounding out the top 10 appear to be in a “second tier of importance” to the survey’s respondents.

Seventeen per cent of those surveyed picked the economy and jobs as a top-three issue, putting it in sixth place, while 15 per cent ranked tackling climate change in their top three.

Meanwhile, 14 per cent of those surveyed said lowering energy costs is a top-three issue. Fourteen per cent also put having a plan for economic recovery from the pandemic among their top-three issues.

Finally, 13 per cent of respondents ranked creating more low-cost or affordable housing for the poor and homeless as a top-three issue.

Bricker said there has been a shift in the issues that Ontarians are most focused on this election cycle, in comparison with the 2018 election.

“When we look at the last provincial election, there was a really big focus on the cost of energy,” he said.

This time around, Bricker said energy costs are still “in the mix,” but the issue does not rank as high as it did during the last election cycle.

Bricker said Ontario voters are more concerned now about the cost of gasoline.

The survey also found other issues that had previously been more important have “fallen down the rankings,” including debt repayment and balancing the budget (seven per cent), public transit (five per cent) and Indigenous issues (five per cent).

‘Setting the table’ for the election

Bricker said the survey’s findings are “setting the table” for the election campaign.

He said each of the parties is going to try to push the issue that Ontarians have told them to be their top priority.

“The job of a political party in an election campaign is to find an issue in which you lead, and push that to the top of the agenda,” he said.

The Ipsos survey found that the top five issues and their relative importance “look quite different” for Progressive Conservative, Liberal and NDP voters.

According to the survey, Progressive Conservative voters said health care was the top issue, at 35 per cent. However, issues two to five were all pocketbook-related.

Thirty-three per cent said lowering taxes was among the top three issues, while 25 per cent picked economic recovery from the pandemic. Twenty-five per cent also said helping with the cost of day-to-day living expenses was a top issue, while 24 per cent picked the economy and jobs.

The handling of the COVID-19 pandemic was the most important issue for Liberal voters, with 37 per cent of respondents saying it was a top-three issue.

Health care was the second-most important issue for Liberal voters at 31 per cent, while 24 per cent said helping to make housing more affordable for middle-class and working families was a top-three issue.

Meanwhile, 24 per cent of Liberal voters said tackling climate change was a top issue, and 20 per cent said helping with the cost of day-to-day needs is a top issue.

Forty-one per cent of NDP voters said health care was a top-three issue, while 31 per cent said handling of COVID-19 was a top issue.

A total of 25 per cent said helping make housing more affordable for middle-class families was a top issue, while 20 per cent said tackling climate change was an important issue ahead of the election.

Which party is best to deal with these top issues?

Those who are surveyed were also asked which party they feel is best to deal with the top issues. 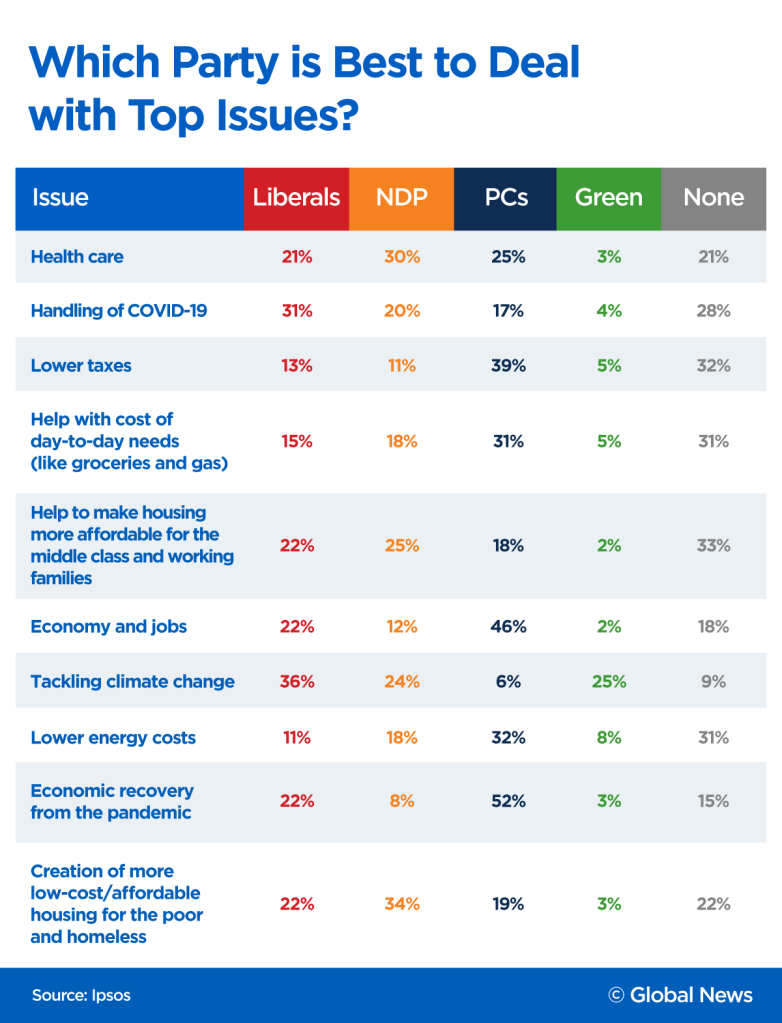 According to the poll, of the top-10 issues, the Liberals are leading on COVID-19 and climate change, while the NDP is leading on health care and affordable housing.

Meanwhile, the Tories are leading on five issues — taxes, help with day-to-day expenses, the economy and jobs, lowering energy costs and economic recovery from the pandemic.

Bricker said the Liberals and the NDP are going to have to “find a way to cut into the Conservative lead on cost of living issues,” before election day.

He said people are “very worried about the increasing cost of living,” adding that many people will likely vote for the party they feel is best able to deal with those types of issues.

“And the Conservatives had to have a pretty convincing lead on those questions,” he said. “So both the NDP and the Liberal Party, their job is going to be to cut into that and try and take their vision of how to manage those issues, and put it into the consideration set for Ontarians, because it’s not really there as much as it is for the Conservatives at the moment.”

METHODOLOGY: This Ipsos poll was conducted between April 13 and 14, 2022 on behalf of Global News. For this survey, a sample of n=1,001 Ontarians aged 18+ was interviewed online. Quotas and weighting were employed to balance demographics to ensure that the sample’s composition reflects that of the population according to census information. The precision of Ipsos online polls is measured using a credibility interval. In this case, the poll is accurate to within ±3.5 percentage points, 19 times out of 20, of what the results would be had all Ontarians been polled. All sample surveys and polls may be subject to other sources of error, including, but not limited to coverage error, and measurement error.